What black holes are really about

There’s a common view of black holes as these mysterious, deadly objects that consume and destroy everything in their path. It’s quite inaccurate.

The true part of it all is that yes, beyond the event horizon the force of gravity is so strong that literally nothing can escape. The key part is “beyond the event horizon.” For anything (significantly) further away, they act like any other object that has mass. The most accurate way to think of black holes is as objects that are heavy but small, mostly because that’s exactly what they are.

So what’s the deal with the whole “light can’t escape” thing? We’ll start with the basics: acceleration from gravity is a function of mass and distance, proportional to m/r^2. If the distance is halved, the acceleration is always quadrupled. Typically there’s a limit to how far this can go, once the two objects make contact. The size of the objects changes how close they can get to each other, and thus changes the maximum possible gravitational acceleration. But there’s no experienced difference between standing on the ground 6370 km from the Earth’s centre and being suspended at the same distance if it had the same mass but were half the size, nor if it were concentrated in a point the size of a pea.

You might have picked up on the key idea here: all that’s special about a black hole is that it’s so small that an object can get close enough to experience such a large force that nothing can get out. The technical definition is that a black hole has all of its mass within its Schwarzschild radius (if it’s not rotating and has no charge, but the basic idea is still the same in those cases). Further away, there’s no real difference. Objects can orbit around it just fine for instance, and a black hole can orbit around other things just fine too. If the Sun were compressed into a black hole with the same velocity, less than 6 km in diameter, all planetary orbits would remain unchanged (even the precession of Mercury, as far as I know, unless general relativity works differently when the mass is compressed). It wouldn’t be safe though, because the Sun would no longer be emitting anywhere near as much light as the Sun does (almost none, see below).

Note that any mass has a Schwarzschild radius, and becomes a black hole if compressed to within it. For example, the Earth would need to be about one and half centimetres across (still with all its mass!) to form a black hole. Most black holes are only many times heavier than the Sun because the extreme conditions to create them only occur when a massive star collapses.

What do black holes look like? You’ll probably hear that, because they don’t emit anything, they’re only visible as an empty spot against the cosmic background. This isn’t entirely true. First of all, there’s Hawking radiation, which is faint electromagnetic radiation resulting from the creation of particle-antiparticle pairs near the event horizon. It’s theoretical, but mostly taken for granted.

The intense gravity of the black hole bends light around it significantly. In the above image, light from the Milky Way is visible on both sides as it wraps around. The event horizon lies around the dark circle in the centre.

Another feature visible with some amount of black holes (all the ones that have been detected, since it’s the only feature visible enough from Earth) is an accretion disk. 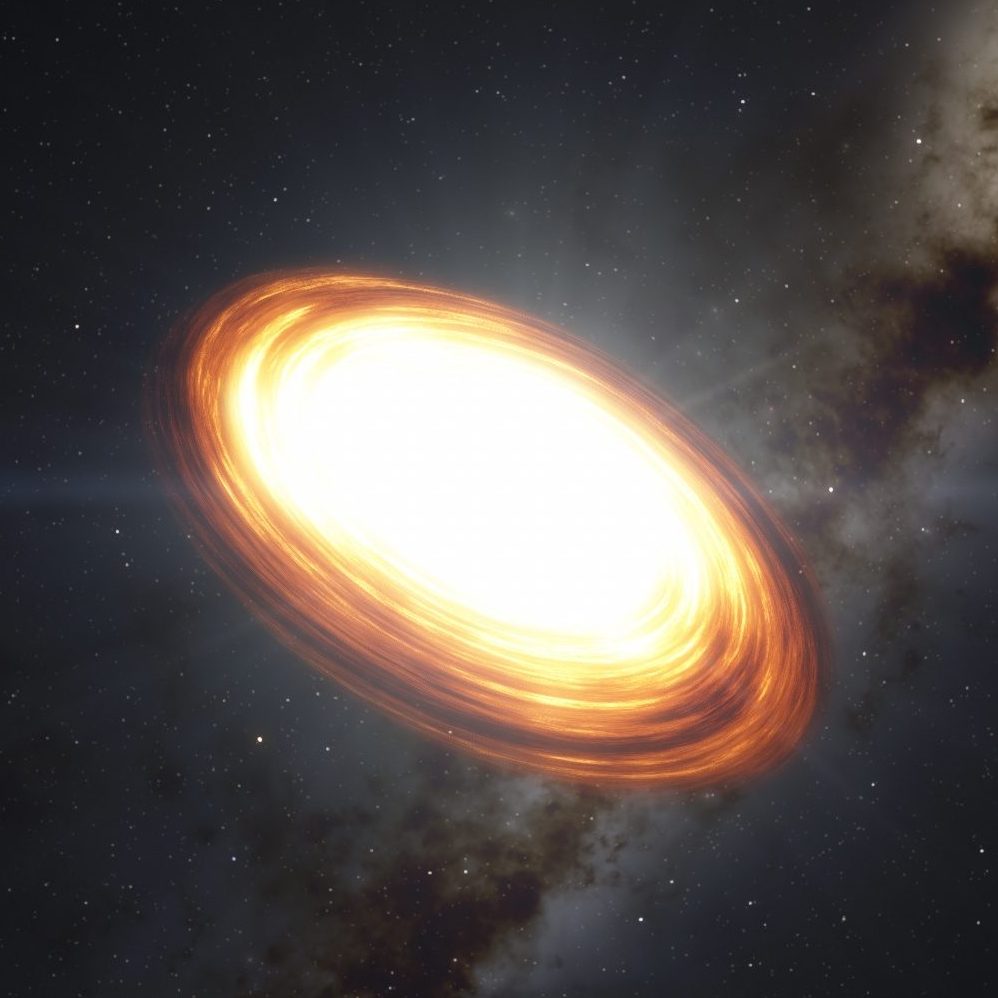 It consists of random dust in orbit around the black hole, heated by friction to give off considerable amounts of light. In a lot of cases, such as the nearest known black holes, the matter of the disk is pulled from a nearby star. “But you spent the first four paragraphs saying how black holes don’t suck in everything around them!” True, but this process is analogous to the disintegration of an object into rings when it gets too close to another. The star is quite large and very close, so in order for its centre of mass to maintain a stable orbit, the parts closest to the black hole don’t have enough orbital velocity (required velocity increases the closer you get) to stay away and end up falling in. Note that they still don’t make a beeline for the centre of the black hole, but get caught in a disk around it.

Here it is, more from the side, so you can see the comparative size of the actual black hole: 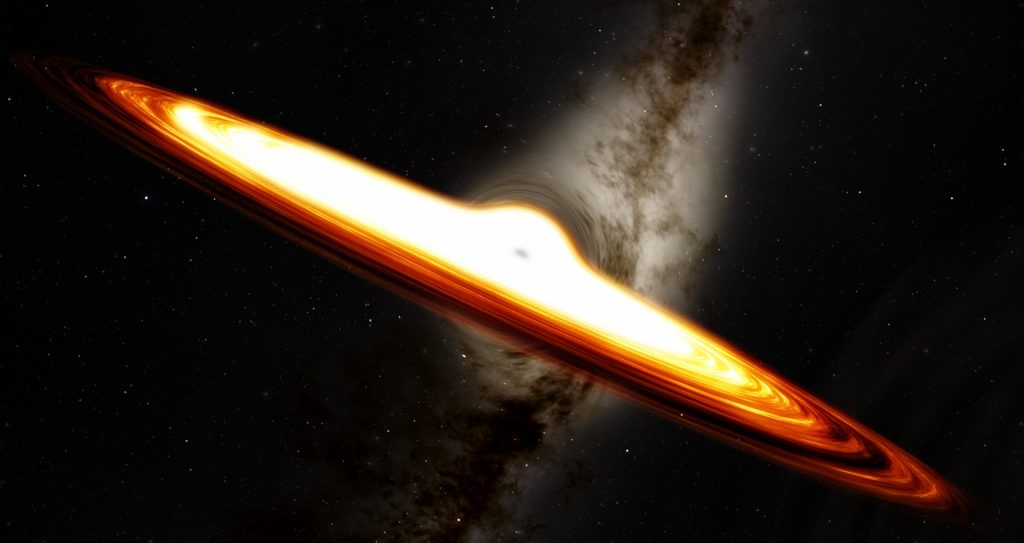 The white bulge is just an effect of gravitational lensing. The black hole (or rather, its event horizon, because what’s beyond the event horizon is literally impossible to observe without going there) is closer to about a third of that (you can see a small black bit near its top).

If you ever get confused about how a black hole works or what something near one should be doing, just remember: black holes are heavy and small, and that’s all.